Nicolò Barbini, a craftsman specialized in engraving on glass and mirrors, had the great merit of having resumed the production of Venetian mirrors, almost forgotten at the beginning of the 20th century

Nicolò Barbini was born in Murano (Venice) on 5 May 1903, by Vincenzo Barbini and Anna Fuga. He was the fifth of eight siblings (five boys and three girls). Love forglass art , present in the family DNA, was transmitted to him by his father Vincenzo and his paternal grandfather, Giovanni, both glass masters , cane shooters for the manufacture of the renowned Conterie, from which he received the first rudiments of the trade and that artistic sensitivity for the glass material that will characterize his future productions.
After elementary school, Nicolò, like all his brothers, attends the School of Design for Craftsmen and Glassmakers , founded in Murano by Abbot Vincenzo Zanetti in 1862, studying under the guidance of prof. Urbani de Gheltof.

Nicolò (right) with the brothers Pacifico and Sidonia

The passion for painting, which he will cultivate throughout his life, and the love for glass , will coincide in the engraving art , finding in this particular and elegant decorative technique the way to express his artistic creativity at the highest levels.
In 1927, at the age of 24, he founded his first company in artistic glass engraved , the current Venetian Artistic Handicraft , with which his brother will collaborate for a few years William , also sublime engraver , as well as a founding member of the renowned SALIR
Nicolò, together with his brother, will thus begin to re-propose, with success, the Venetian mirrors in French style, recalling the old glories of Murano .

After only two years of activity, in 1929, he will be awarded the 1st Grade gold medal at the “Esposizione Mostra Campionaria” in Florence.

With Nicolò and Guglielmo, the Barbini family will return to produce Venetian mirrors , after about a century of “stalemate”. In 1940, together with his brother-in-law “Memi” (Guglielmo), he founded the company “Barbini e Longega” in Murano artistic Venetian mirrors engraved ”, The current“ Domus Vetro Artistici ”, which will receive numerous acclaim, thanks, above all, to the imagination and craftsmanship of Nicolò. 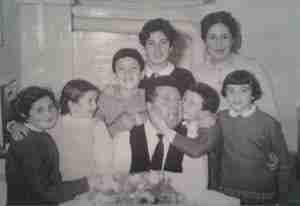 Nicolò and Teresa with their children (from left: Lucia, Anna, Vincenzo, Maria, Giovanni and Margherita)

On December 28, 1942, he married Teresa Barovier, belonging to one of the most famous glass families Murano, daughter of Napoleone Barovier , one of the best known glass masters of his time, descending from the same Angelo Barovier . From their union six children were born: Maria, Vincenzo, Margherita , Lucia, Giovanni and Annamaria.

In 1960 he will inaugurate the Artigianato Artistico Veneziano , a laboratory specialized in production of Venetian mirrors modern and in the reproduction and restoration of the ancient ones, introducing the sons, Vincenzo and Giovanni, to mirror art and passing on the secrets of the trade to them. 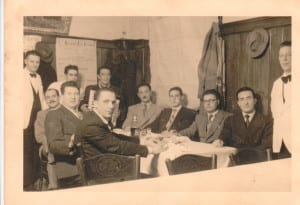 Nicolò (second from left) with friends

During his life, Nicolò, close numerous relationships, characterized by a deep and sincere friendship, with glass masters , designers and local artists, such as Dino Martens , Aldo Radi, Anzolo Fuga and, in particular, with Ermanno Toso (said Nino cagni ), designer and artistic director of the renowned F.lli Toso. His generosity and affability, as well as deep faith, were distinctive traits of his personality, which characterized him both as a man and as an artist.

Nicolò Barbini has the great merit of having resumed, together with his brother Guglielmo, the production of Venetian mirrors , almost forgotten a Murano at the beginning of the 20th century, proposing a classic style, reinterpreted in the light of their unparalleled mastery and skill in execution.

He died in Venice on February 17, 1985, at the age of 82, after having seen the birth of eight of the future twenty-two grandchildren.